Bali is a fascinating paradox but one thing we could always rely on was the food. We had many fabulous dining experiences, the surroundings equally as impressive as the menus. Breeze at The Samaya at Seminyak was one of the most memorable. The sun was already low when we arrived, the palm trees reflecting in the calm waters of the pool. 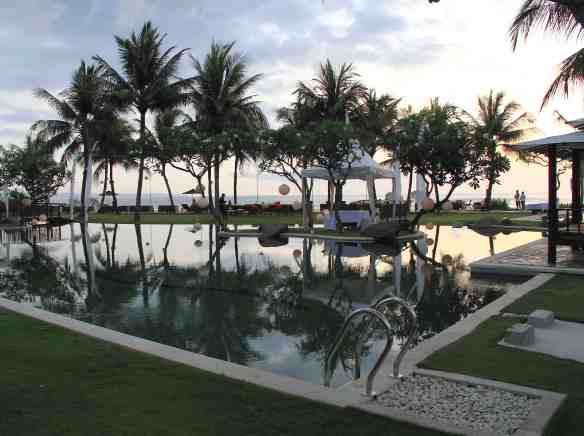 Our party of eight had a very special table under our own canopy.

We had wonderful views of the beachside diners, the ocean and the gorgeous sunset.

The food was beautifully presented, Michael started with his favourite sashimi and I opted to sample everything for the main course.

The resort is set in two hectares of tropical gardens, pools and villas inviting a state of ultimate relaxation. The setting of the sun certainly didn’t diminish the enchanting    ambience.

If we were ever to visit Bali again, it would be nice to stay at The Samaya or at least return and relive this lovely evening.

Last evening, after a sweltering 30°C day, we drove Cooper, with the top down, into Burnie to attend the preview of the “National Geographic 50 Greatest Photographs” exhibition at the art gallery. We are very privileged to have this fantastic exhibition here in Burnie as part of the world tour. Each 3′ X 4′ image is accompanied by the story behind the photo as well as the photographer who captured the moment. I shall have to return and spend more time absorbing the works and to watch the many videos with behind-the-scenes stories and interviews. We used the excuse of being in town to dine at our favourite Bayviews Restaurant once again. With heavy cloud cover I didn’t expect much of a sunset but at 9pm, the world outside turned a stunning shade of pink.

I should never have doubted nature’s ability to produce a spectacular show.

After a day spent savouring the digestible delights of Margaret River, and a peaceful amble through a magnificent Karri forest, we thought there wasn’t much else we could do to top off a wonderful day. We were wrong. We arrived in Busselton as the sun was setting, casting an eerie light to the east. The longest wooden jetty in the southern hemisphere, Busselton Jetty stretches almost two kilometres out to sea.

Construction began in 1853 and the jetty was gradually extended until the 1960s. Closed to shipping in 1972, a period of neglect ensued, along with damage by a cyclone in 1978 and a fire in 1999. The jetty has since been restored and the Underwater Observatory at the end is on the list of things to see next time.

Toward the west, the descending sun was creating a spectacle.

We were the only ones on the sheltered beach, the calm waters of Geographe Bay gently lapping at the shore. The changing palette was mesmerising as Sol slipped below the horizon. 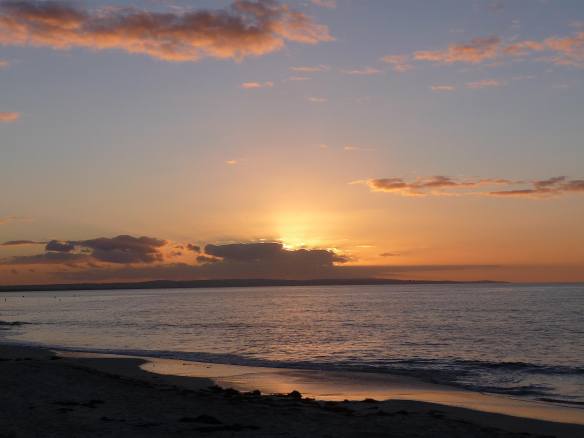 A perfect end to a glorious day.

After leaving Inverness, we drove over the Grampian Mountains, with the intention of visiting Balmoral Castle. The snow became heavier

and as the temperature plummeted to -5ºC, we decided to head straight for Edinburgh instead. We arrived as the sun was setting 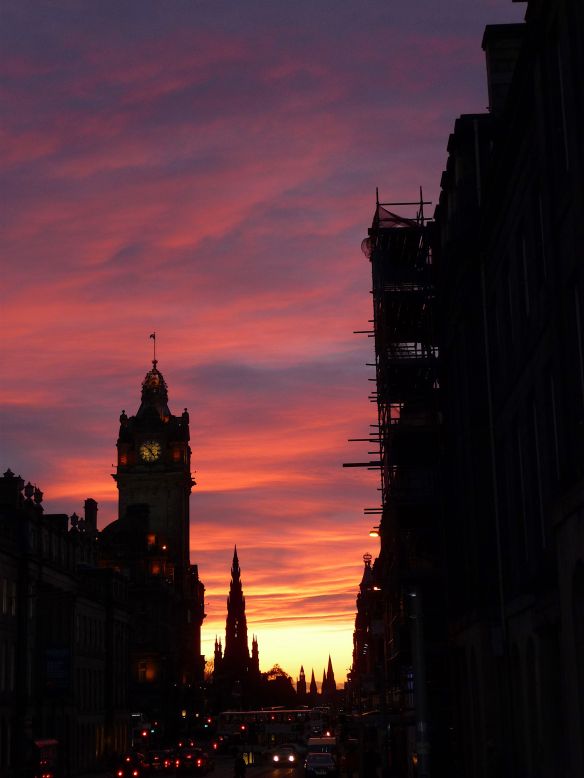 and found a hotel we liked the look of. Unfortunately, they only had a room for one night but recommended another place for us. We were told it was opposite a big building, we couldn’t miss it. After driving past three times, we finally found Ashgrove House, but couldn’t see anything across the road in the dark. After a marvelous curry and a good night’s sleep, I opened the curtains and, sure enough, the Donaldson’s School, a residential and day school for the deaf, was certainly a big building across the road.

Our accommodation was lovely, in the attic room of this beautiful Victorian villa built in 1868.

A short walk away, Edinburgh Castle loomed magnificently over the town.

Built on volcanic rock, there has been a royal castle on this site since the 12th century, 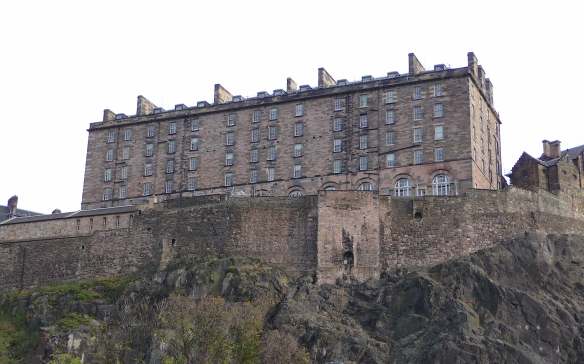 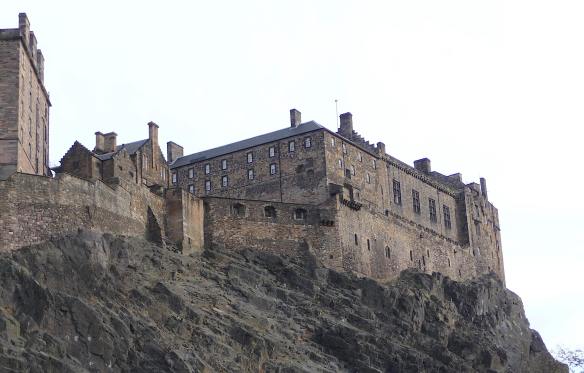 with royals in residence up until 1633.

The view from the castle over Edinburgh and beyond was stunning. 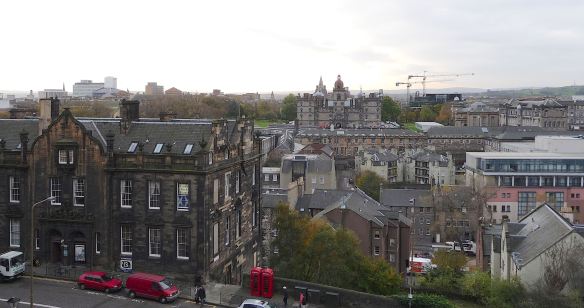 As we left the castle, we caught a glimpse of the Firth of Forth between the buildings, 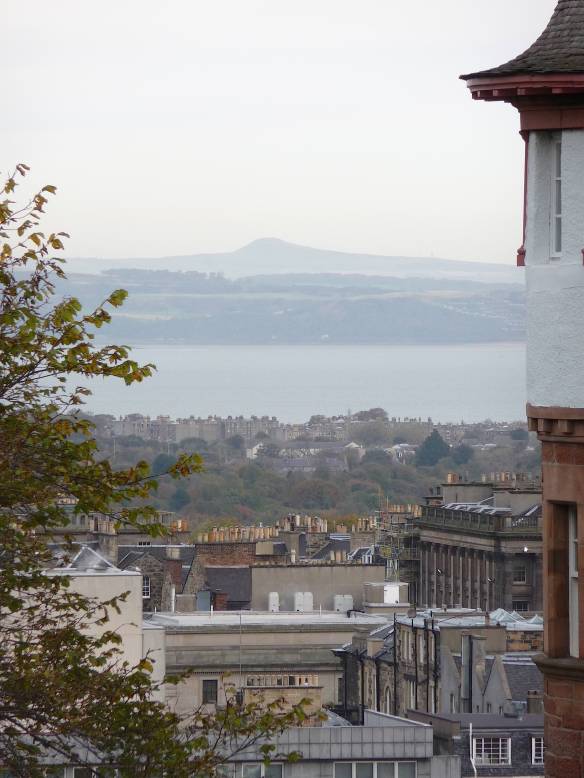 before setting off down the Royal Mile.

The Scotch Whisky Experience was tempting but, as Michael isn’t keen on whisky, we opted for the 3D Loch Ness Experience instead.

After treating ourselves to a pair of gold celtic rings, our keepsake from Scotland, we celebrated with a pint and bacon sandwich at the Royal Mile Tavern. I have seen condom machines in women’s toilets before, but never scotch whisky flavoured, nor with the advice to refrain from driving while using the product!

The old tenements and alleyways were fascinating

as we made our way to the far end of the mile and the Palace of Holyroodhouse. The Queen’s Gallery is an art gallery that forms part of the palace and exhibits works from the Royal Collection. 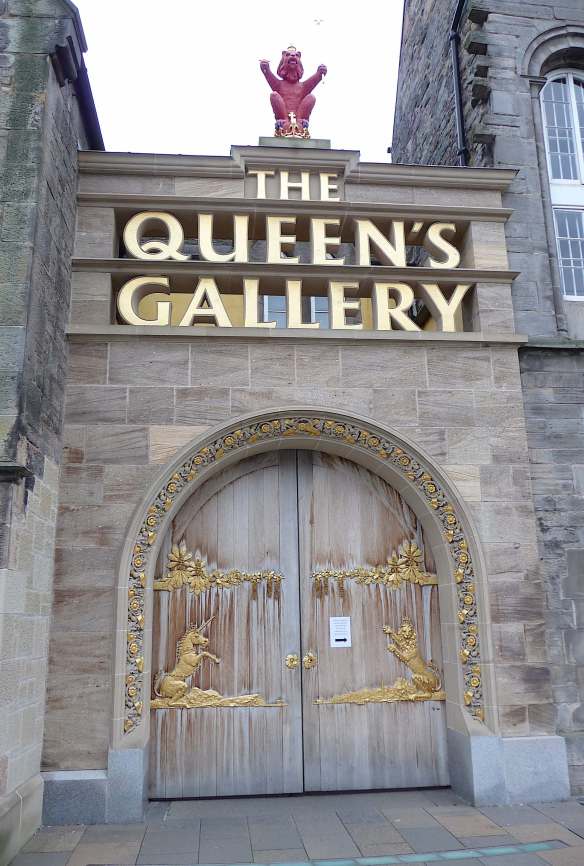 The palace as it stands today was built between 1671-1678 and is the official residence of the Queen when she is in Scotland.

The fountain is a 19th century replica of the 16th century fountain at Linlithgow Palace, just 15 miles away.

We wandered back to the new town, absorbing the spectacular architecture of the Edinburgh skyline 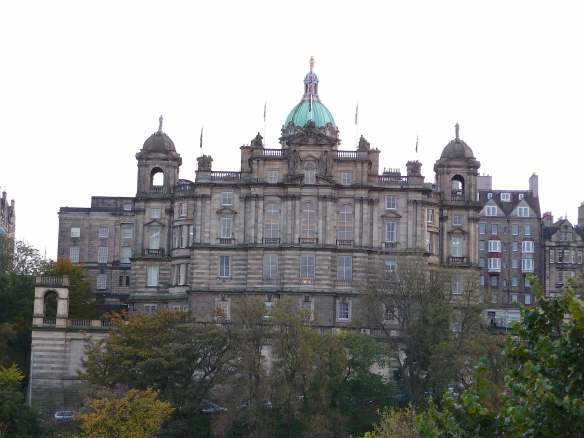 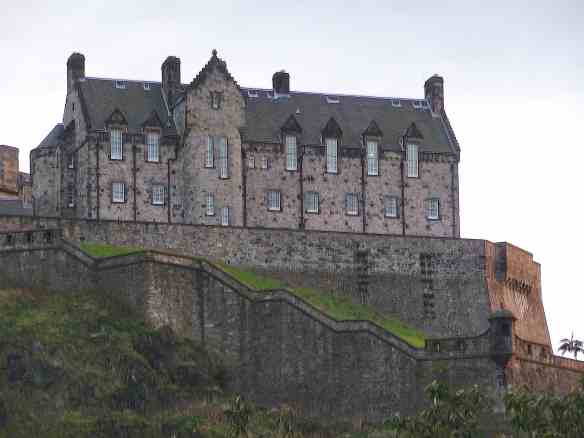 and the undying traditions of Scotland.

The next morning, we detoured to Dalmeny to see the Forth Bridges before leaving Edinburgh. The magnificent railway bridge was opened in 1890 and is the second-longest single cantilever bridge span in the world.

The 2.5km suspension road bridge was opened in 1964, six years after work began. 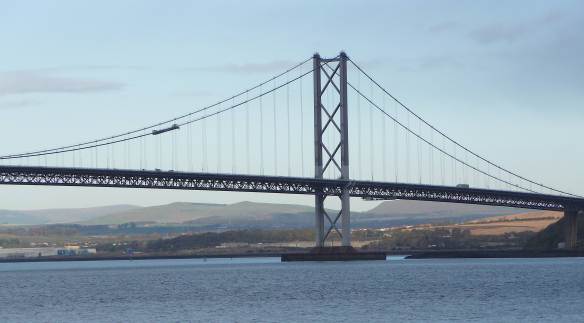 We didn’t drive across it, instead heading in the opposite direction.

We have experienced some spectacular sunsets from out hilltop home and this one recently was a doozy. I noticed a red glow outside and, glancing out of the lounge window, this is what I saw.

I grabbed my camera and raced outside to watch as nature set fire to the western sky. 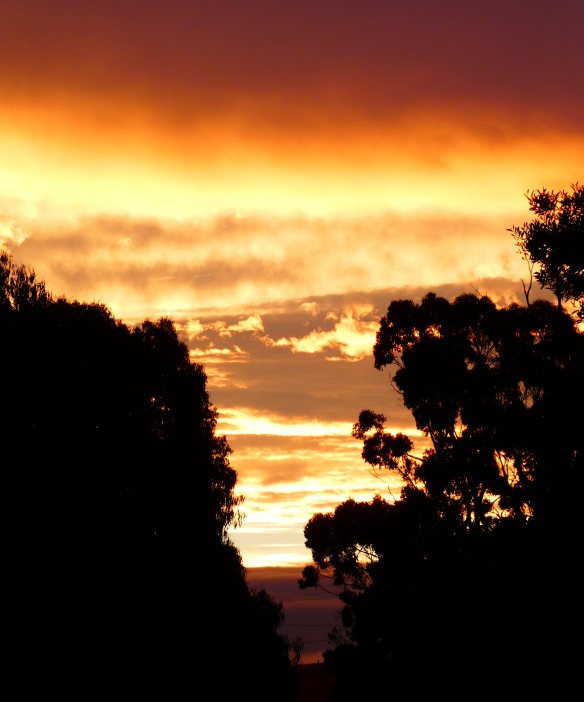 Whichever direction I looked, different patterns and colours were emerging, 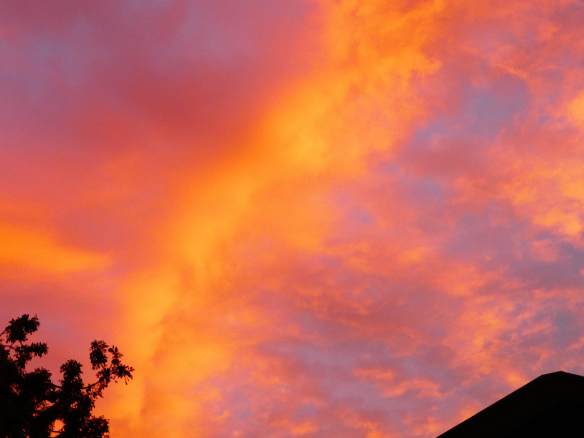 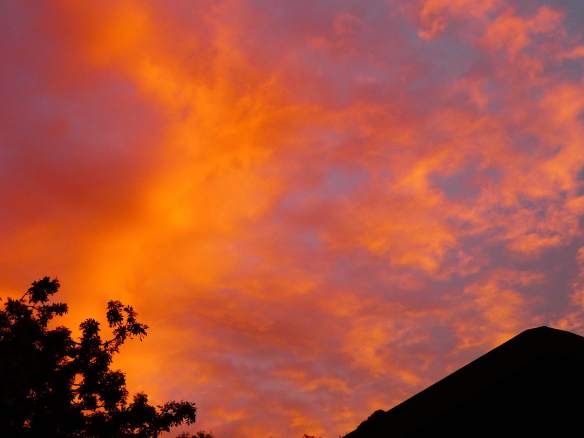 as though looking through a huge kaleidoscope.

The sun sank below the horizon,

the show over for another day.