There are so many beautiful places to visit along the Tamar River, and a scenic forty minute drive from Launceston, the most sublime can be found as the waters empty into Bass Strait. It is impossible to feel anything other than calm when arriving at Low Head, surrounded by the blues and greens that only nature can bestow. This fabulous old Queenslander can be rented as holiday accommodation, with a view like that I don’t think I would ever want to leave.

In 1798, explorers George Bass and Matthew Flinders circumnavigated Tasmania in their vessel, Norfolk and proved the existence of a strait separating the island from Australia (apparently, it took a long time to dig that ditch). With much difficulty, they located the mouth of the Tamar River and made landfall seven kilometres up river at Port Dalrymple, now called Georgetown. Ten years later, the crew of Hebe found the entrance more than ‘difficult’ and came to grief on the treacherous reef, the first of nine shipwrecks to come. Consequently, convict labour set to work to construct Tasmania’s second (Australia’s third) lighthouse from local rubble with a coat of stucco to help with durability and a lantern room built of timber.

First lit in December 1833, the structure slowly deteriorated and was replaced in 1888 with the double brick version still standing today. Originally painted solid white, the red band was added in 1926 to improve visibility during daylight.

The initial four-roomed lighthouse keeper’s quarters were attached to the base of the tower, as seen in this illustration that is exhibited at the site.

Tasmania’s only foghorn was installed at Low Head in 1929. For those who might understand, it is one of the largest Type G diaphones ever constructed and is one of only two of the type functioning in the world today. Decommissioned in 1973, it was restored by a group of volunteers and became operational again in April 2001.

The foghorn is sounded at noon each Sunday and can be heard up to thirty kilometres out to sea.

The area around the lighthouse encompasses Low Head Coastal Reserve, home to little penguins, the smallest of all penguin species. Also known as fairy penguins, they are the only species of penguin that are dark blue and white rather than black and white. The Penguin Tour experience sees them waddling back to their burrows after a day in the sea under cover of darkness. We were fortunate to spy this lovely creature settled on the nest, apparently accustomed to human presence.

The waters of the Mersey River travel 147km from Lake Meston in the Walls of Jerusalem National Park to escape into Bass Strait at Mersey Bluff on the northwest coast of Tasmania. 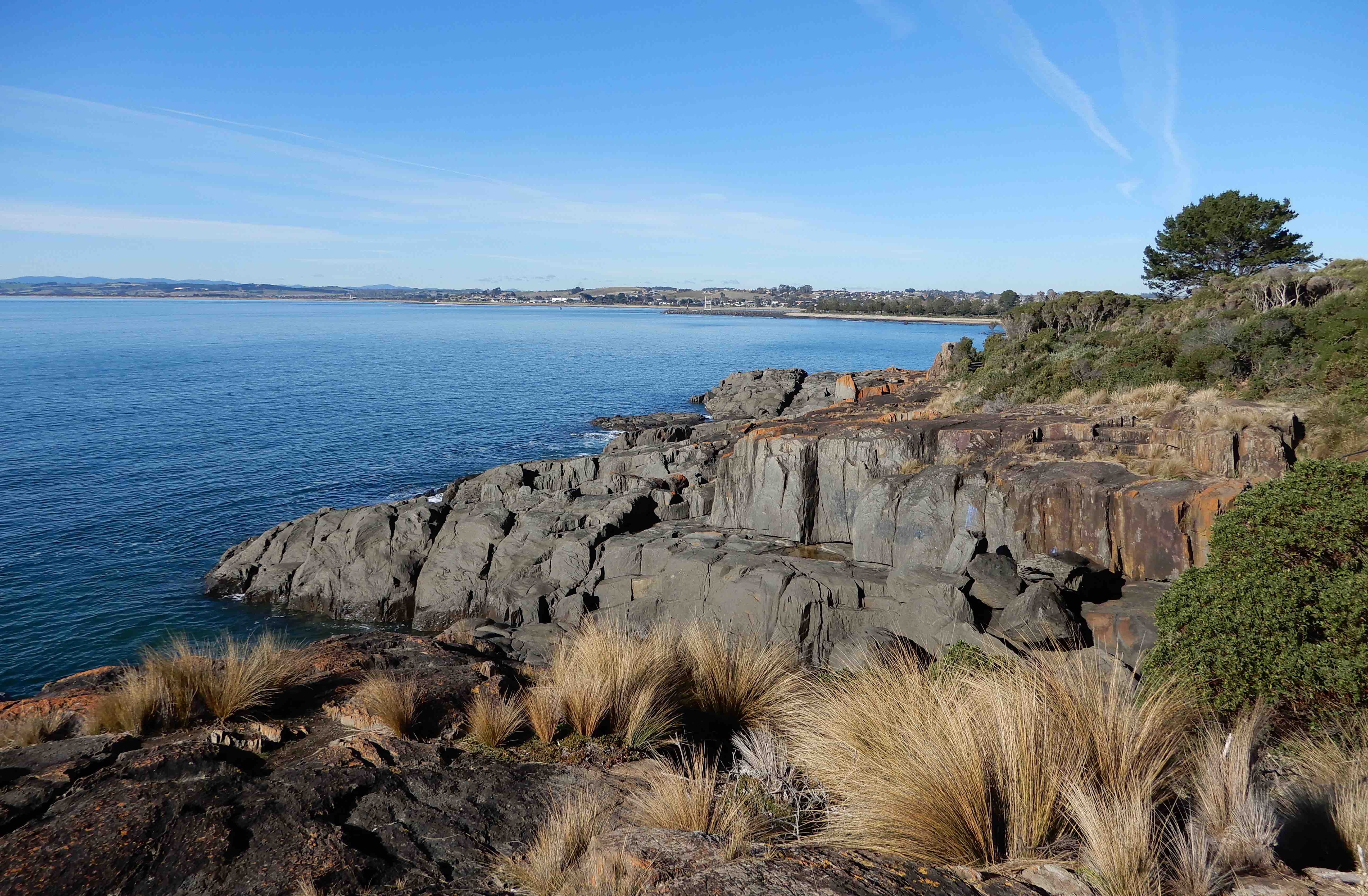 The dolerite headland was formed 185 million years ago in the Jurassic Age. As the rock cooled, joints and fractures were created along with some very flat surfaces, providing places where the Aborigines would sit and carve.

Tiagarra Aboriginal Cultural Centre and Keeping Place has been closed for quite some time due to lack of funding. The building houses the history, art and culture of the Tasmanian Aboriginal people and there are several rock carvings and middens along the bluff walk.

The lighthouse was completed in 1889 and was automated in 1920. The addition of four vertical red stripes in 1929 make it quite distinctive. 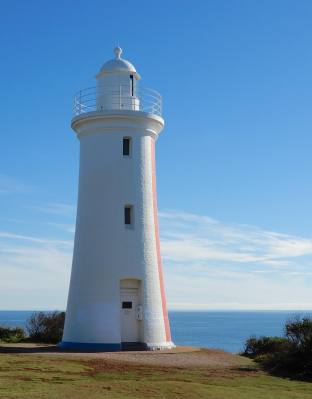 We followed the footpath around the bluff with spectacular views of the coastline to the east.

There are many rock formations along the way, it’s not difficult to see why this one is called ‘the hat’.

The lighthouse receded behind us

as we rounded the point, the sun highlighting the colours in the rocks.

I could sit for hours and watch the incoming tide sneak its way into each crevice, retreating angrily in defeat. 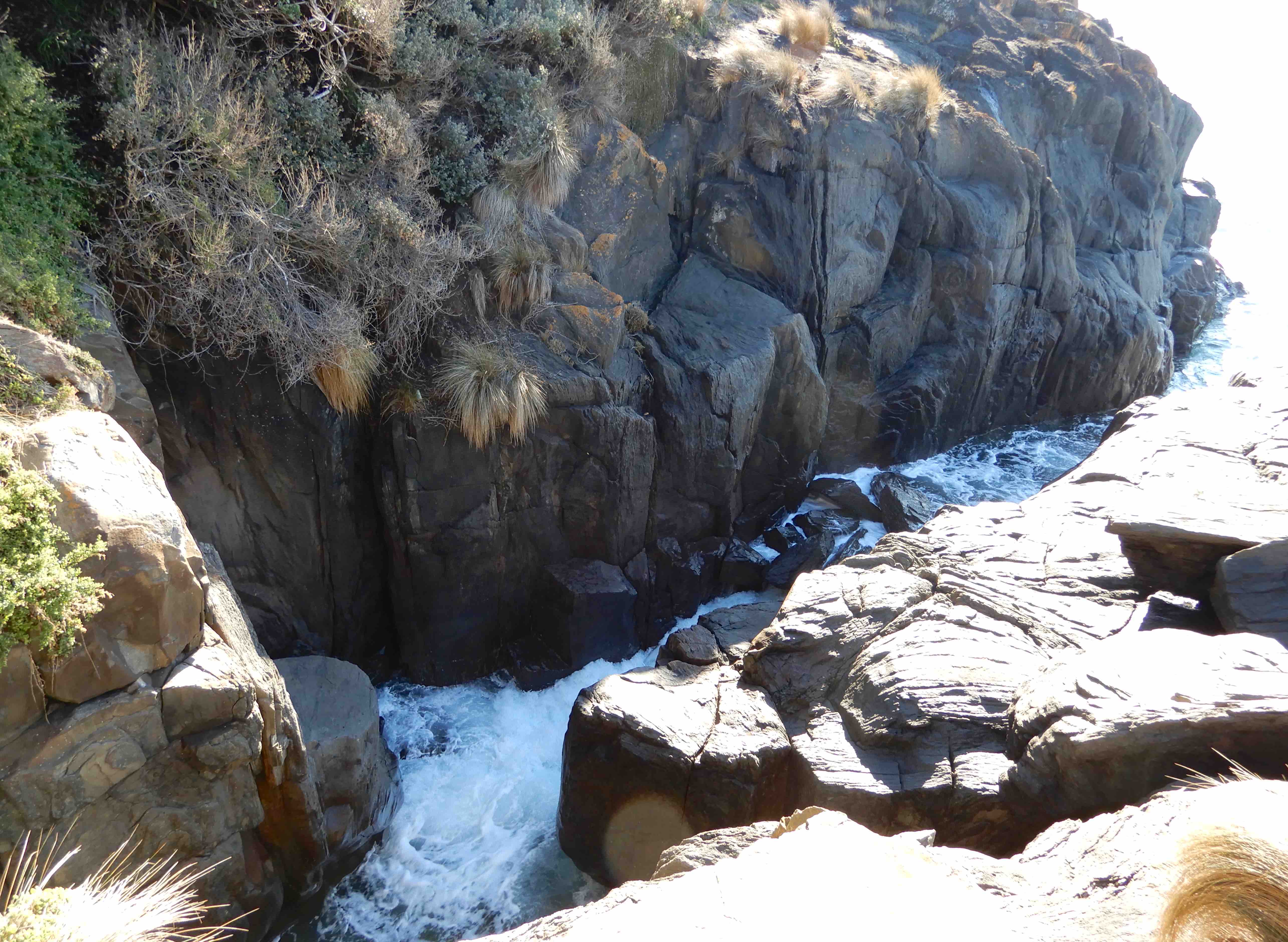 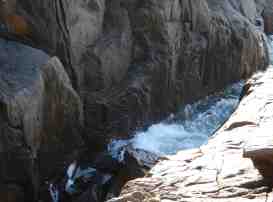 Diamonds sparkled on the water as far as the horizon.

We passed a craggy memorial to a brave young man who lost his life while trying to save another. 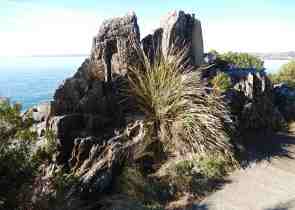 The path continues to Mersey Bluff Reserve but we took the short cut back instead, through the picnic ground with serene water views. 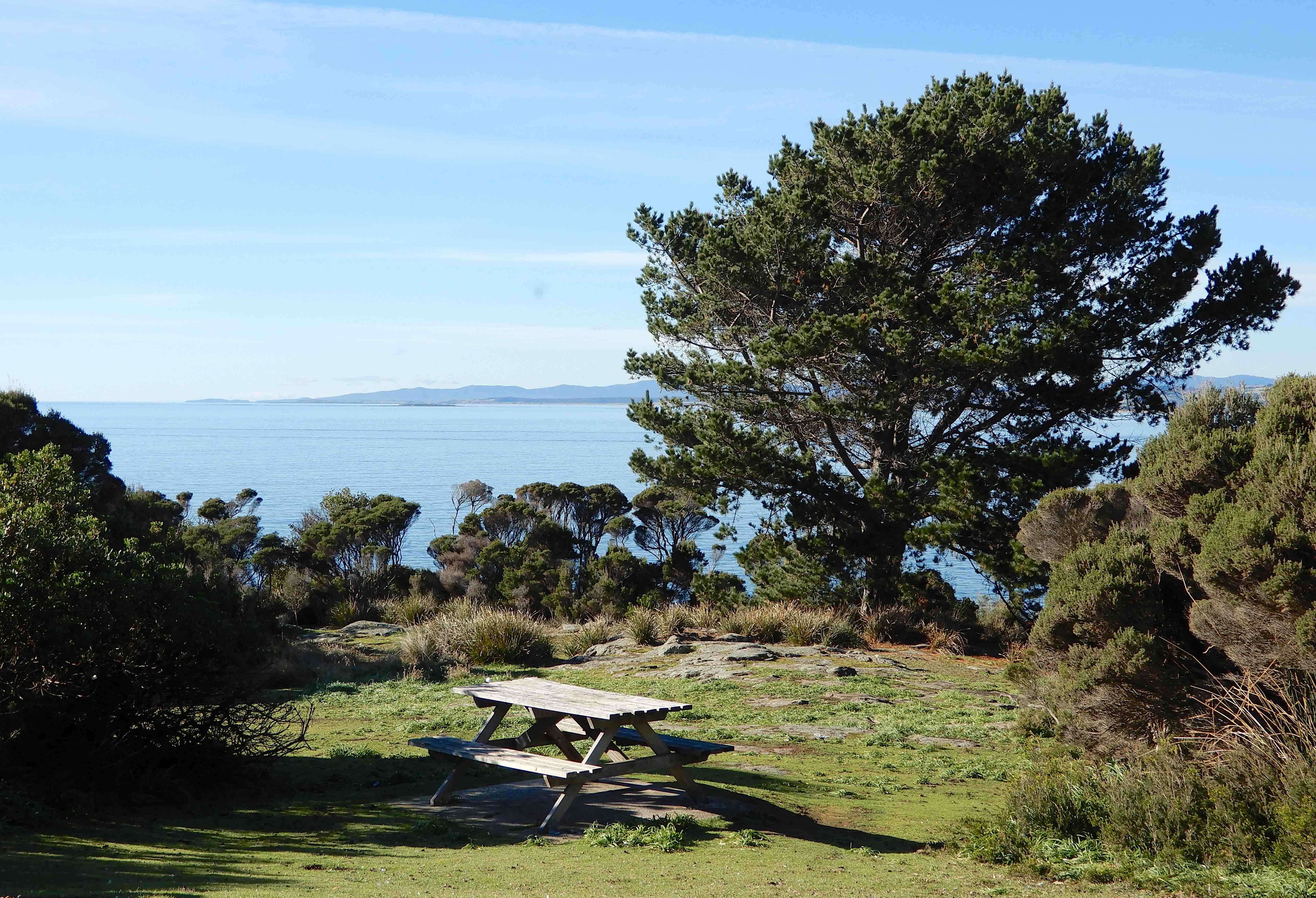 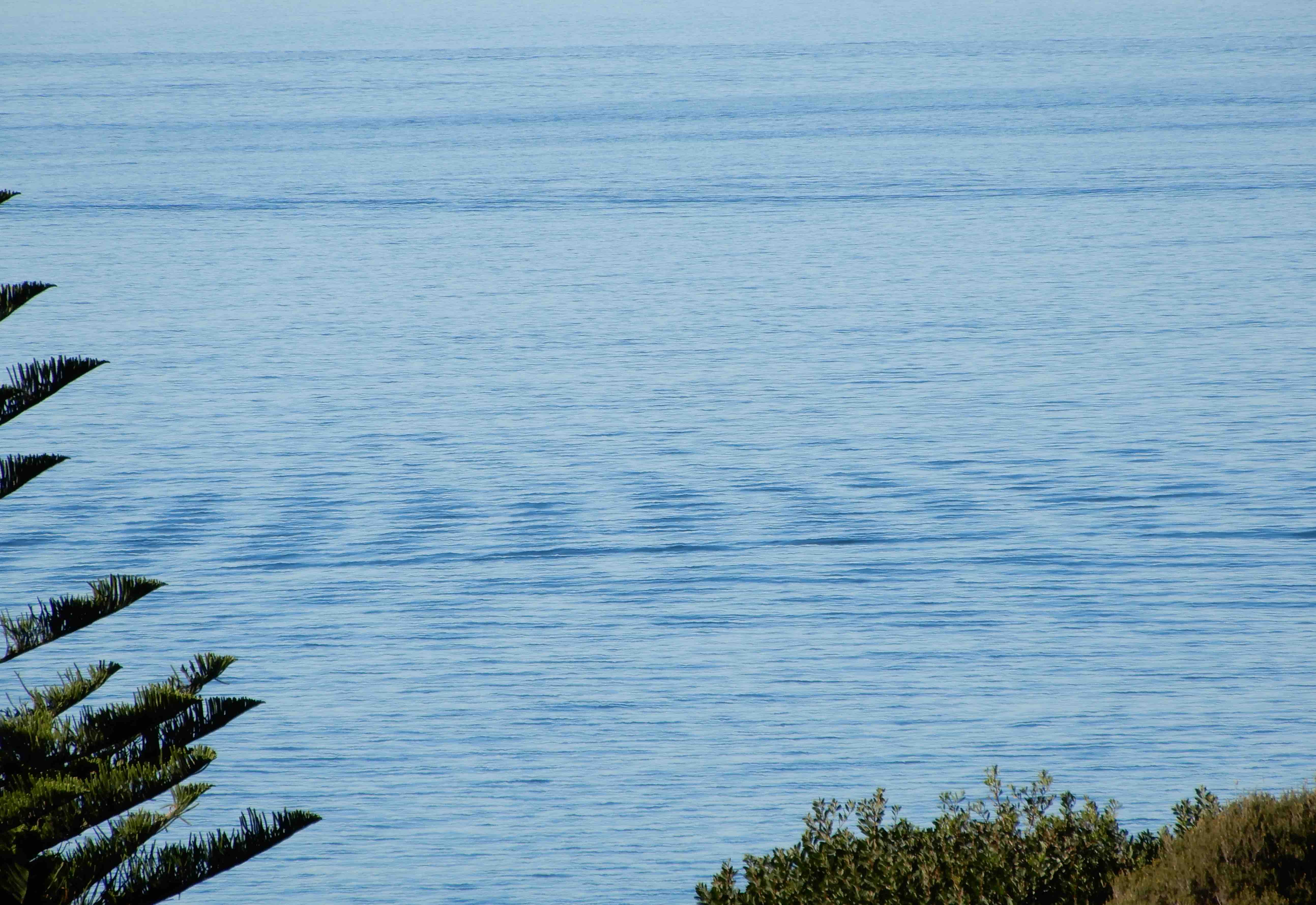 We continued our traversal of Geographe Bay to our destination, Cape Naturaliste lighthouse.

The tower was constructed in 1903 from local limestone and was activated the following year.

Unfortunately, we weren’t able to tour the lighthouse which is now fully automated, being the last lighthouse in Western Australia to lose its keeper in 1996.

At the northernmost point in the Margaret River Region, positioned on a 100m high bluff, the views were spectacular.

Stormclouds were gathering out to sea.

It is little wonder the French navigator, Nicolas Baudin, named Geographe Bay after his flagship and the cape after his second ship, Naturaliste.

The traditional owners of the land, the Wardandi, call it Kwirreejeenungup:

“the place with the beautiful view”.