Toward the end of our third day on the Indian Pacific, the Nullarbor Plain, that had kept us company for so long

As the sun descended to the horizon

the sky awoke with colour.

Soon after sunset, we arrived at a railway siding at Rawlinna Station. With 70,000 sheep on 8,000 sqkm, Rawlinna is the largest sheep station in Australia.

By the light of a spectacular moon,

we shared platters of barbecued meats and roasted vegetables while our resident musician entertained us with Aussie favourites. 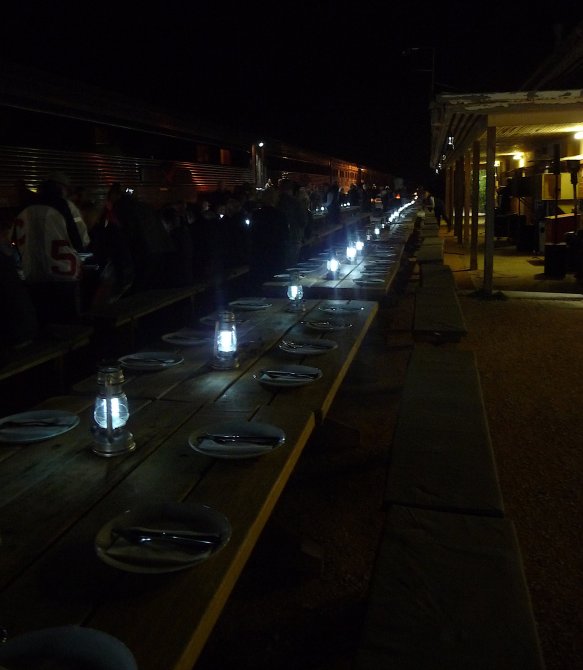 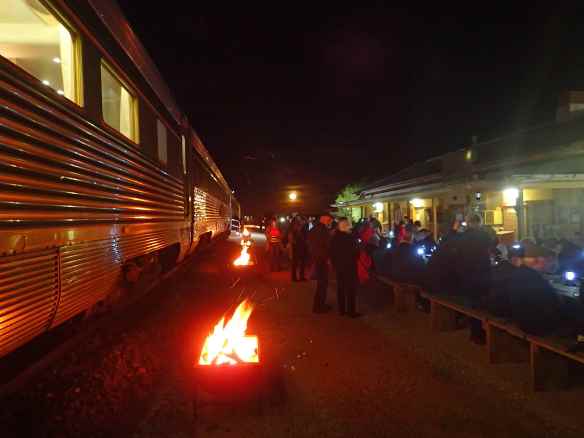 The train stayed close, her warm glow welcoming us at the end of a wonderful evening.

After two days of train travel, we were well and truly relaxed. The vastness of the Nullarbor Plain was boggling.

On the longest straight stretch of railway line in the world (478 kilometres) we suddenly saw signs of life.

We had arrived at the town of Cook, the last outpost before crossing into Western Australia.

The street sign didn’t mention that Perth is 1,500km and Sydney nearly twice that distance.

Established in 1917 when the railway was built, Cook was once a thriving town with a school, hospital, golf course and shops. The railways were privatised in 1997 and there is now a permanent population of four who remain to service the trains that pass through. We had some time to stroll around the town, the abandoned buildings are sadly neglected. 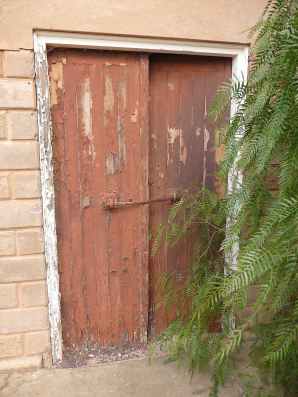 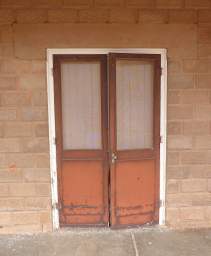 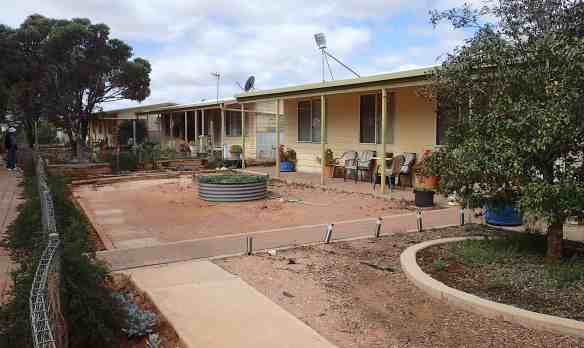 had some interesting garden ornaments

and the paths and parks had been maintained. 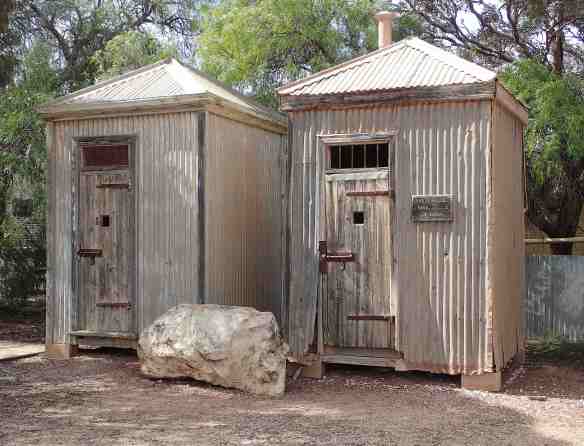 and the thunderbox looked a little worse for wear. 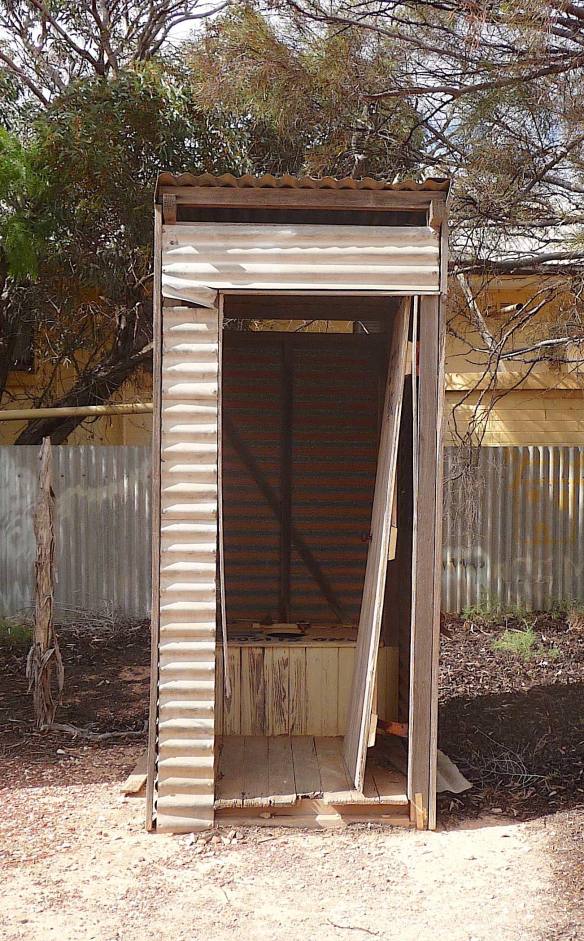 In 1982, 600 trees were planted around the town, the event commemorated in stone. 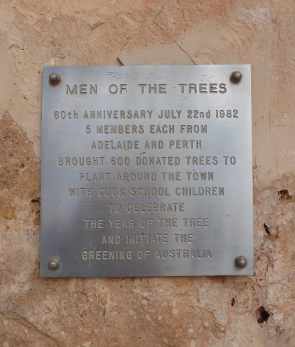 There was more of Cook to discover but it was time to board the train and continue across the Nullarbor to Western Australia.

The second day of our transcontinental journey on the Indian Pacific was spent relaxing, reading and watching the scenery pass by.

There were sporadic signs of human habitation in the otherwise desolate landscape. 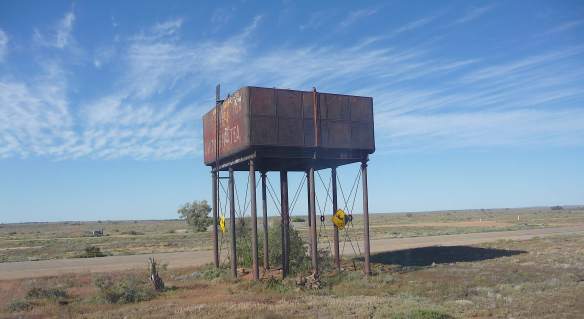 The terrain changed the further we travelled through South Australia

and just north of Peterborough, the fertile green fields of farmland contrasted with the barren outback.

Passengers can commence their journey in Adelaide, where the train stops for supplies and welcomes a new crew. This allows a few hours to enjoy an off train excursion to the National Wine Centre. Built in the year 2000 in the shape of an oak barrel, it has won many architectural awards. 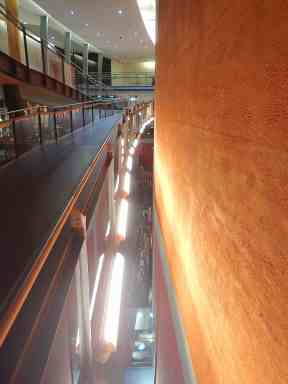 We were taken on a Wine Discovery Journey, beginning with the open cellar. 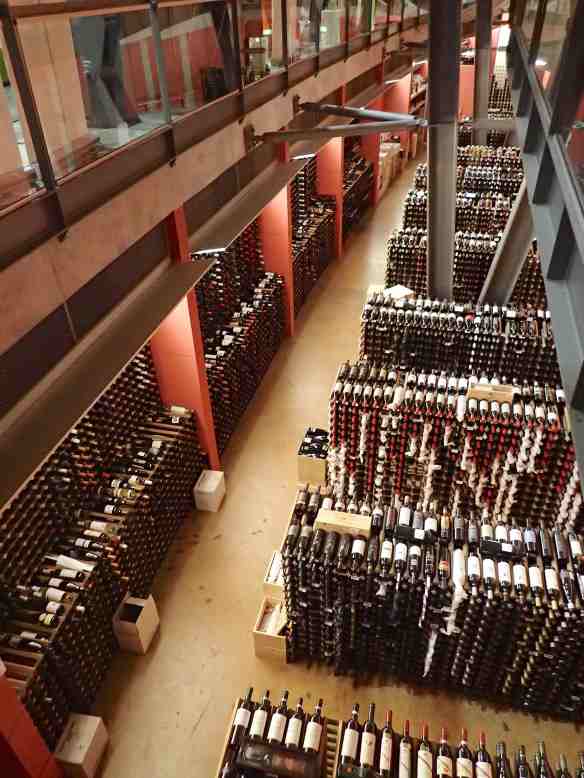 With the capacity to store up to 38,000 bottles, it is one of the largest in the Southern Hemisphere. 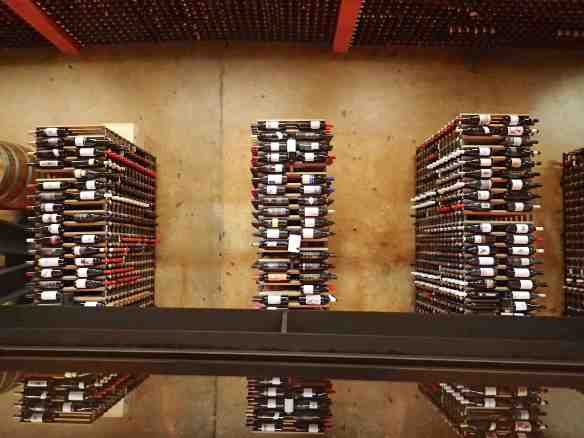 The ‘Wined Bar’ would be a lovely place to linger, with 120 different wines to sample in one tasting room.

We were introduced to the technology, varieties and styles of wine 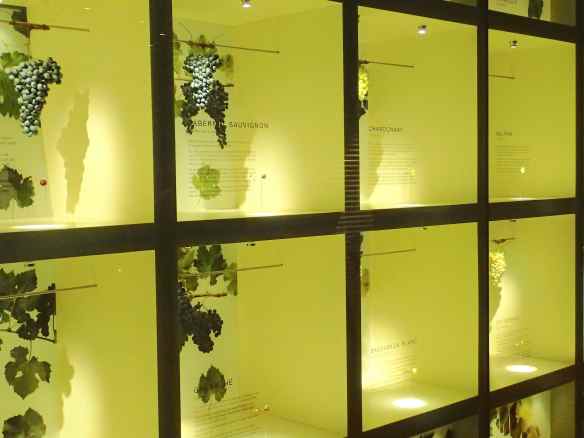 as well as this 150 year old Shiraz vine, painstakingly extracted from St. Hallett’s vineyard in Tanunda.

We made our way back to the dining room, passing some interesting art pieces, 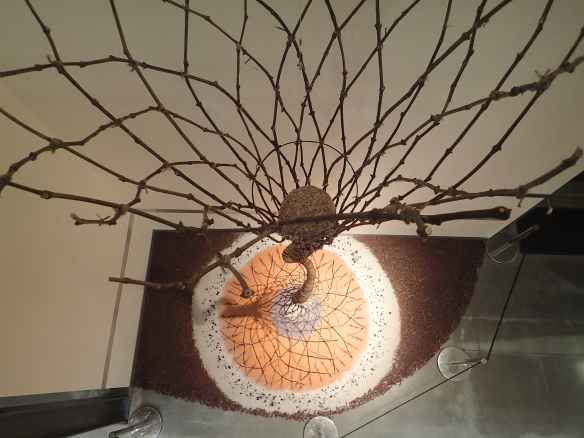 to indulge in canapés and a delicious dinner – with wine, of course. A rainy night greeted us as we left the wine centre

and boarded a coach to return to the station.

I think a good night’s sleep was had by all.

Kata Tjuta, meaning ‘many heads’ in Anangu language, is otherwise known as The Olgas, a group of 36 domed rock formations 25km east of Uluru.

The tallest peak, Mt Olga, is 198m higher than Uluru and was named in 1872 in honour of Queen Olga of Württemberg, the daughter of Tsar Nicholas I. 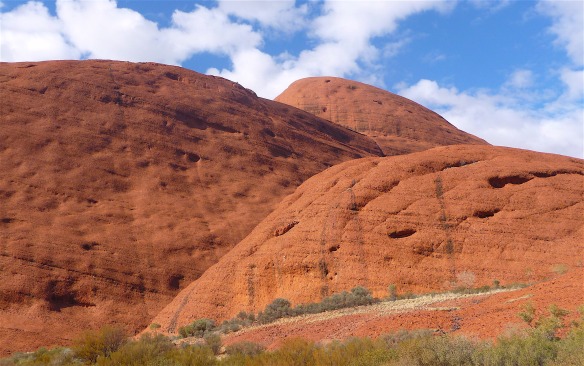 We set out early and spent the morning exploring the magic of Kata Tjuta. 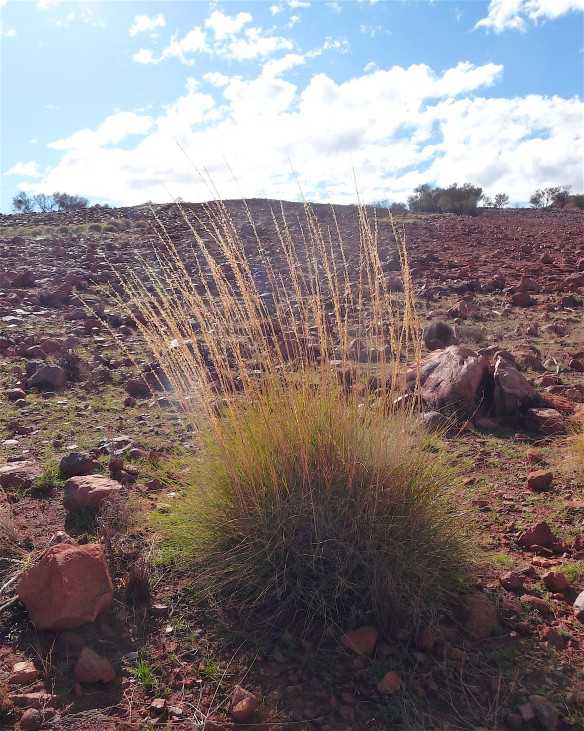 with some stunning scenery. 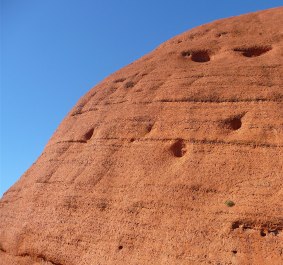 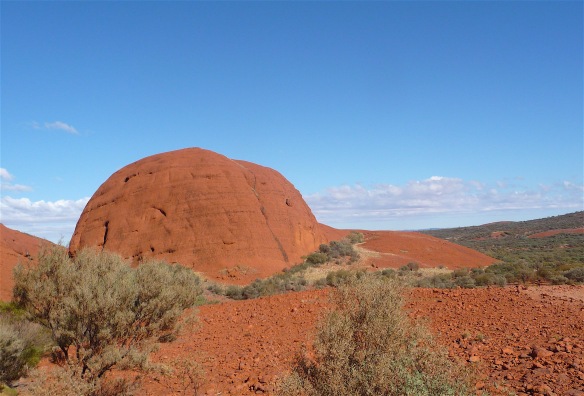 Karu Lookout gave a hint of the extent of this spectacular rock formation.

We continued on past incredible escarpments 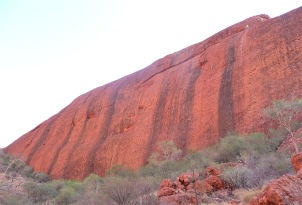 The path became narrow and rugged 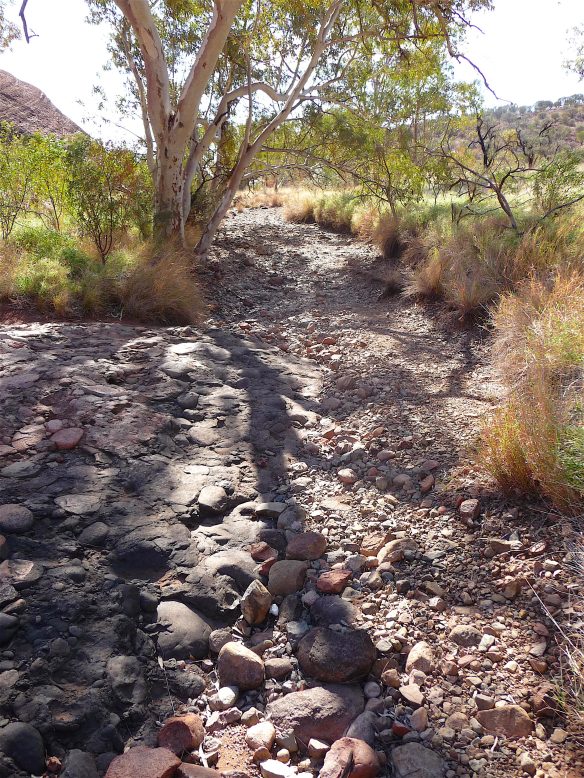 as it meandered within the domes,

In places, the trail all but disappeared and we had to scramble up the steep slopes. 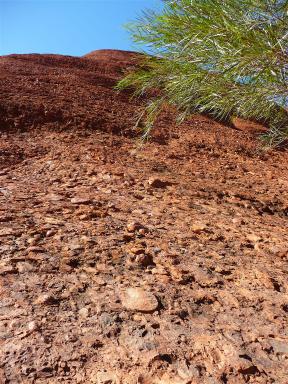 The rock domes are the remains of erosion that began over 500 million years ago and extend six kilometres into the ground. 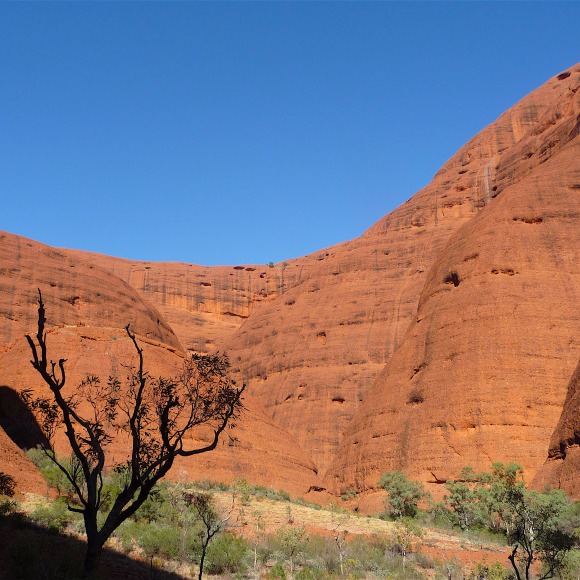 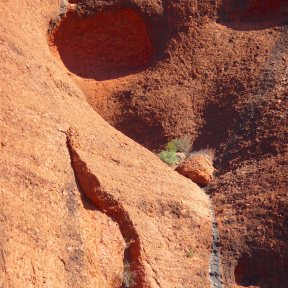 The track improved a little

just before we reached the gap in the rocks that is Karingana Lookout.

From there, the path descended very steeply to the bottom of the valley to complete a circuit walk. We opted to retrace our steps instead, our feet sighing with relief as we drove away, with fabulous memories of Kata Tjuta.

As we journeyed through the Northern Territory, we were randomly distracted from the vastness of the desert by some very interesting features along the way. Central Mount Stuart is a mountain peak, about 200km north of Alice Springs, named in honour of the Scottish explorer John McDouall Stuart who reached the area in April 1860. He determined a point approximately 4km south of the peak to be the centre of Australia. 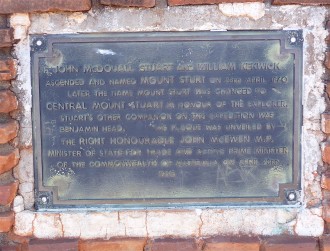 I was very excited to find a winery in the desert, although there was little evidence of vines. 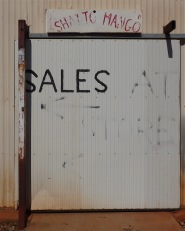 We tasted a crisp Mango Magic, fortified Mango Moonshine liqueur and sparkling Mango Mist. We even bought a couple of bottles.

Not too far down the road, we stopped at Aileron roadhouse

to meet ‘Anmatjere Man’. The statue, based on a traditional man from the local Anmatjere tribe, is 17 metres tall and weighs 8 tonne.

He took twelve months to build and was joined three years later, in 2008, by a wife and child.

30km north of Alice Springs is the Tropic of Capricorn marker, a stylized globe of the world on top of a 6.5 metre slanted pole.

In 1987, the local Alice Springs radio station ran a competition for design sketches from the public. The winner was a part time announcer for ABC radio. A local artist was commissioned to carve the Capricorn Goats in either side of the cement base.

90km west of Alice Springs, we had a brief stop at Stuarts Well roadhouse.

The pub/ campground is also the site of a camel farm, set on 9 acres at the foot of the James Ranges.

The race, run in 1994, was 3200km along the Stuart Highway from Darwin to Alice Springs and return.

On 24th May, a Ferrari F40 crashed into a checkpost killing the two Japanese occupants and two track officials. The cause of the accident was found to be excessive speed.

We lunched on the lawn under some magnificent gum trees at Curtin Springs, a cattle station 100km east of Ayers Rock. The station covers just over a million acres – that’s 100km long x 40km wide!

Back on the road, we soon spied Mt Conner, at the border of Curtin Springs station, often mistaken for Uluru by excitable tourists.

There are so many wonderful surprises in the Australian outback, many we would have missed without our fabulous friends to guide us.