Just when we thought we had seen everything Werribee has to offer, we discovered the RAAF Museum just 10km down the road. Point Cook is the birthplace of the Australian Flying Corps (AFC) which was renamed to the Royal Australian Air Force (RAAF) in 1921. It was the Air Force’s only base from 1912 to 1925, when RAAF Laverton was built 20km away. The two became amalgamated in 1989 under the one name, RAAF Williams, named after Sir Richard Williams. The first military pilot to graduate from Point Cook in November 1914, he is considered the ‘father of the RAAF’. We felt a sense of privilege as we were handed our permits to enter the facility at the security gate. 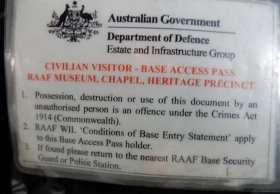 Having only seen these aircraft in movies, I was awed by the magnitude of the de Havilland Canada Caribou on display between the hangars.

The RAAF Museum was established in 1952 to preserve aircraft, documents and memorabilia associated with the Air Force and opened to the public in 1972. 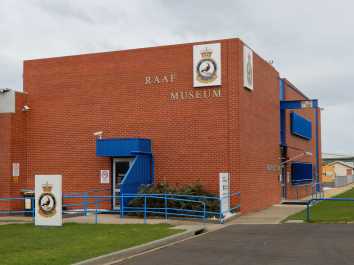 There is so much to see, even before reaching the aircraft hangars. This little woollen airman doll was carried as a good luck mascot by Squadron Leader A.S. McCracken in his Halifax bomber during World War II. A.S. was thrown through the cockpit canopy following a crash landing in 1944 and survived unscathed. The medals belonged to Air Vice Marshal Sir George Jones who shot down seven German aircraft during World War I. He became Chief of the Air Staff during the World War II and led the RAAF until 1952 when he retired.

The information accompanying various displays of uniforms, rations and kit made for very interesting reading, far too involved for me to summarise. 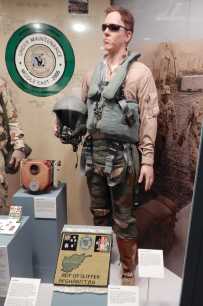 The exhibits continued throughout the hangars with the added dimension of magnificent aircraft. We started in the Training Hangar to see how RAAF training has advanced over the years. To me, some of the earlier aircraft were real works of art with the use of beautiful polished timbers and complex mazes of wires. The Maurice Farman Shorthorn was the first armed aircraft to engage in aerial combat in World War I. Known as ‘Rumpety’ to the students because of the noise it made while travelling over the ground, it was used to train pilots until 1919. 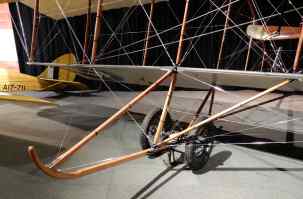 Used by the RAAF throughout the 1920s, the Avro 504K was the first training aircraft that could be flown aerobatically. It is also linked to the first death in training of a RAAF airman at Point Cook following an accident in 1921.

The Tiger Moth on display was built at the de Havilland factory in Bankstown in 1942 and entered service in November 1943. It has been restored to original military configuration including the training colours of its wartime service. 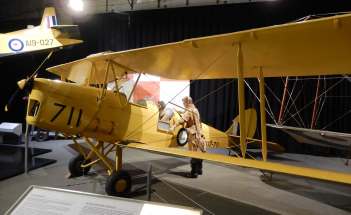 The aircraft silhouette changed dramatically after World War II with the single-seat fighter, Vampire, initially in RAAF service in 1949. The two-seat trainer version was introduced in 1951 and the first ejection performed in Australia was from a Vampire in September 1952.

The Winjeel, designed to replace the Tiger Moth as a basic trainer, first flew in 1951. 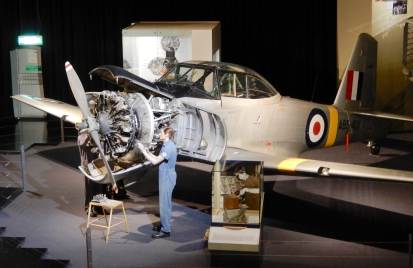 The Winjeel was replaced in 1972 with the CT4 Airtrainer. It was nicknamed the ‘Plastic Parrot’ because of its lightweight construction and green and yellow colours. 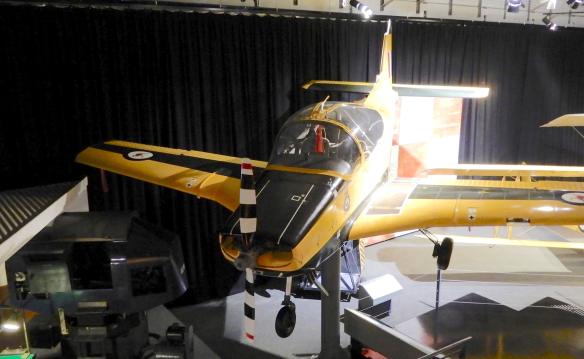 The Italian designed Aermacchi MB 326H on display, known as the Macchi in Australian service, was the first received by the RAAF in October 1967.

Simulators are an important part of training, the RAAF now have a simulator for each aircraft type in service. The older models might have required a certain amount of imagination. 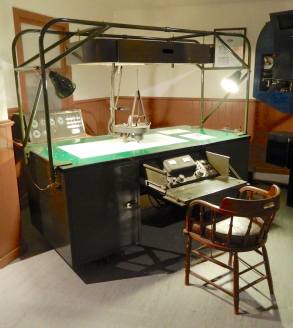 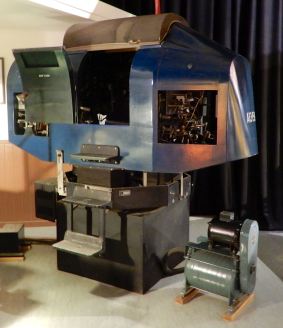 Manufactured shortly after World War II, the ‘Pie Cart’ was used to teach students how to hand-start an aircraft engine. It was nicknamed the “Terror Machine” for its ability to inflict serious injury. The yellow and black safety stripes are a recent addition.

We ventured next into the Technology Hangar to experience the evolution of military aviation, stepping back in time once again to 1913 and the magnificent wood, wire and fabric construction of the B.E.2a. 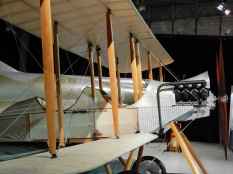 The SE 5 is an exact replica of an aircraft that entered service in 1922. The original was damaged in 1928 when it taxied into a DH9 and again, a month later, in a forced landing. The run of bad luck ended when it was eventually destroyed by fire in June 1929.

I can only describe the Supermarine Walrus as extraordinary. It looks like the most cumbersome and least likely to stay aloft aircraft ever conceived. On the contrary, it was designed to be catapulted from warships and was used for reconnaissance and air-sea rescue until 1946. 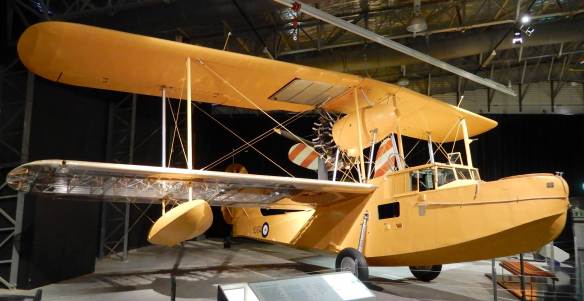 Suspended from the rafters, the Iroquois helicopter is one of two involved in the mission to re-supply ammunition to ground troops at Long Tan in 1966. After retirement in 1984, the aircraft was used as a training aid at the RAAF School of Radio before being transferred to the RAAF museum in 1993 and restored to its Vietnam War configuration. 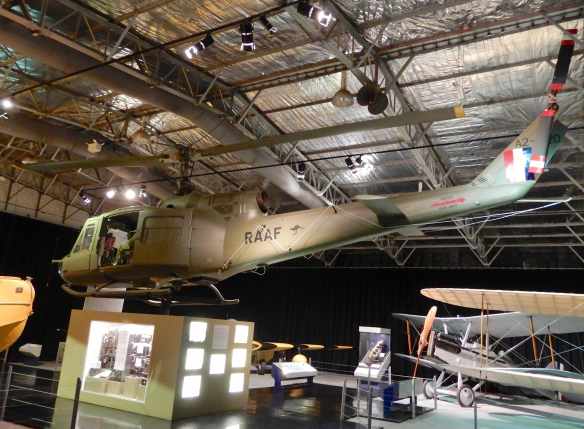 The Vampire F-30 began service in the RAAF in 1950 and five years later, was converted to a target-towing aircraft with the addition of a hook and release mechanism below the cockpit. The striking paint scheme was designed to prevent the towing aircraft being mistaken for the target.

The Boston Bomber on display arrived in Melbourne in 1942 and carried out missions from Goodenough Island until it crashed on the airstrip due to battle damage a year later. It was recovered from there in 1987, restored and transported to the RAAF Museum in 1998, the only survivor of 69 Bostons operated by the RAAF.

An assortment of missiles are on display, including the Bloodhound surface-to-air missile of the 1950s and the more recent ASRAAM heat seeking air-to-air variety.

We finished off with a quick peek in the Restoration Hangar, a boggling collection of aircraft in various states of repair (or disrepair, depending on your viewpoint). 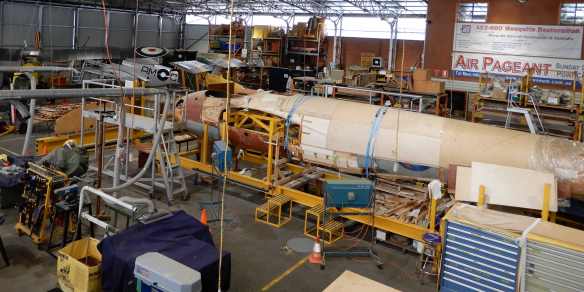 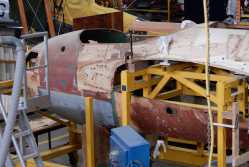 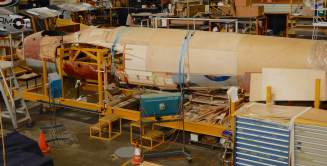 If you want to read more about the de Havilland DH.98 Mosquito restoration, take a look at Aces Flying High, Deano is a mine of information.