Being the largest county in the UK, there were so many places we wanted to see in Yorkshire. Aware of our limited time, we had to make some difficult decisions. The town of York was an obvious choice. We entered the historic walled city, founded by the Romans in 71AD, along Micklegate. Once the most important of York’s four medieval gateways, we passed beautiful old buildings

on our way to the river. 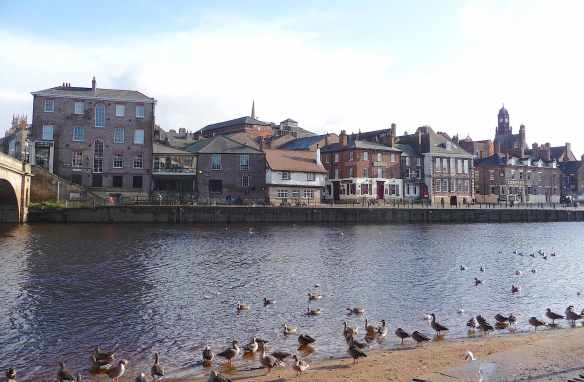 There are nine bridges across the River Ouse within the city of York, the oldest being at the site of the present Ouse Bridge as early as the 9th century. The history behind the Ouse bridge is quite interesting. In 1154, the stone bridge collapsed when a large crowd gathered to welcome Archbishop William to York. It was considered a miracle that no-one drowned and the Archbishop was later canonised and had a chapel named after him. The replacement bridge was supported by six arches and was lined with houses, shops, a toll booth, a courthouse, a prison and the chapel dedicated to St William. In 1367, the first public toilets in England were installed on the bridge. In 1564, the river flooded and the bridge collapsed, the buildings were swept away. The next new bridge was built much higher and houses and public buildings were again built along its length. After 250 years or so, in need of repairs, the bridge was replaced. Started in 1810, the present day bridge took 11 years to complete.

Across the river, we made our way to The Shambles. Dating back to the 14th century, York’s oldest street has some fascinating architecture.

Historically a street of butchers shops and houses, the name is thought to come from the medieval word Shamel, meaning booth or bench. Livestock were slaughtered at the back of the premises and the meat laid out on what are now the shop window bottoms.

The overhanging fronts of the timber-framed buildings almost touch each other in some parts of the street. This was deliberate to shelter the wattle and daub walls and protect the meat from direct sunlight.

The butchers shops of old have been replaced by quaint businesses more appealing to the tourists that flock to The Shambles.

There isn’t much left to see of York Castle. Built in 1068, there were originally two circular castles, this one known as Clifford’s Tower. The wooden structure was replaced in the 13th century with stone, suffered some damage during the Civil War and was then gutted by fire after a major explosion in 1684. It wasn’t restored until the 19th century and was then used as a jail until 1929.

It would have been wonderful to have had two hours to spare to walk the 3.4 kilometres of beautifully preserved town walls. We had to be satisfied with the short section that took us back to Micklegate and our next exciting destination.