The inclement weather followed us from Gourock as we travelled north along the western shore of Loch Lomond. Often considered the boundary between the lowlands of Central Scotland and the Highlands, it is the largest inland stretch of water in Great Britain. We happened upon the village of Luss on the banks of Loch Lomond and through the mist loomed The Lodge on Loch Lomond, a luxury waterfront hotel.

We walked along the river, the beautiful autumnal hues refused to be dampened by the deluge. 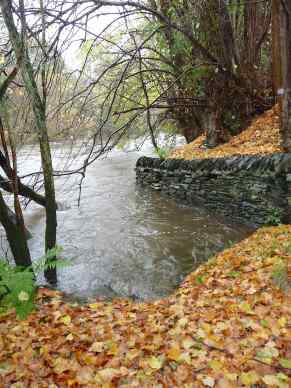 The path led us to a magnificent Celtic cross, dedicated to St. Kessog who brought Christianity to Luss in 510AD and died a martyr at the hands of Druids in 520AD.

We left Luss and Loch Lomond,

our objective, the Island of Seil. We had seen an episode of “Build a New Life in the Country”, featuring a derelict tin church dating back to the early 1900s. The couple who bought it renovated it superbly and created not only their living space, but a self-contained apartment in the old vestry. I was determined to find it. We crossed the 18th century Clachan Bridge

and had a pint at the Tigh-An-Truish Inn. The name means ‘house of trousers’ and this was apparently the place where islanders swapped their kilts for trousers after kilts were banned following the 1745 rebellion. For some reason, I don’t have a photo of the Inn but one of the tiny kiosk across the road.

We drove around the island in search of the tin church. We did find it but again, I have no photos of it, just the rugged scenery of the island.

We returned to the mainland and our northward course with no real destination in mind. We passed Castle Stalker, built around 1320 and well known for its appearance in Monty Python and the Holy Grail.

Fort William seemed like a good place to spend the night. We found a lovely hotel with spectacular views along Loch Linnhe, 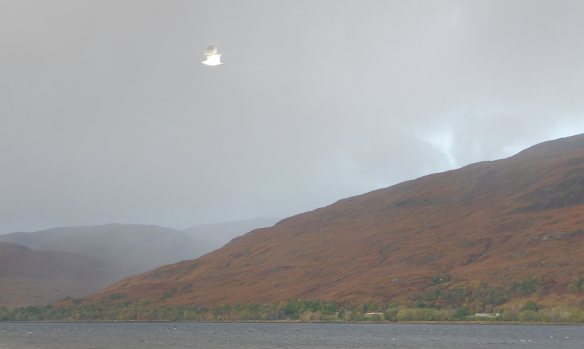 enjoyed a wonderful dinner and settled in for the night.

2 thoughts on “Argyll & the Isles”