The seasons have turned here in Tasmania and our long days of summer are behind us. Once again, we shared the garden with our reptilian residents for a few months but they have now found cosy homes for the winter. We can’t blame the snakes for wanting to live here, after all, we have created a paradise for them. 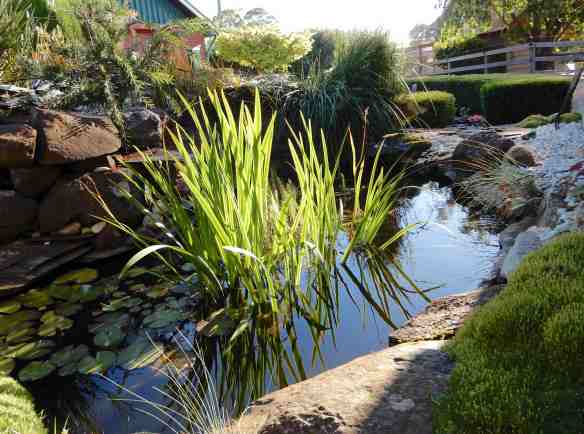 We named our first lodger Suzy. She was quite small and liked to try out a variety of spots to capture the warmth of the sun.

Strangely, our large goldfish liked to keep her company.

After a while, she left to make a home for herself in the forest and someone else moved in. He was looking rather dull and spent a lot of time among the rocks.

He then took to burying himself in the mulch, a bit worrying as there were times he was completely hidden. We assumed he was preparing to shed his skin, I was hoping to witness the process but I think it was done in private, we never did find the evidence.

It was at this point we realised we had two occupants, with one under the mulch and another in the favourite afternoon dappled shade position. 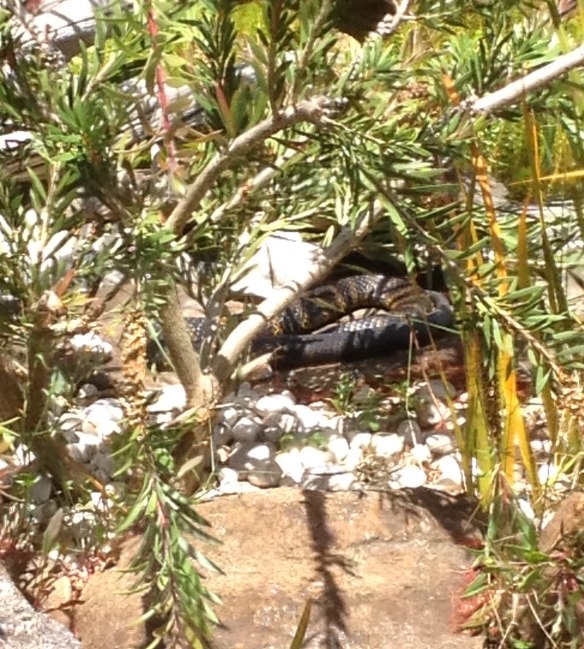 A short time later, perhaps after shedding, one moved out and the other remained. We would see her every morning catching the sun on the eastern side of the pond and then on the rocks under the callistemon in the afternoon. We had visitors for a couple of days in January and there was no sign of our tiger tenant until the afternoon of their departure, when she moseyed across the lawn to resume her residency.

Supposedly, tiger snakes don’t stay in one place for long but it seemed as though it was the same snake. She knew our voices and routines and was quite comfortable to lie undisturbed by our presence, we had a mutual respect for personal space. 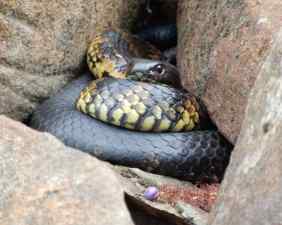 We had a couple of very hot weeks in February where we saw no snakes and assumed she had moved on to start a family in the forest. One evening, we saw her (we like to think it was her) making her way up the driveway straight to the low birdbath we have for the wrens. I have never seen a snake drinking before, she was very thirsty.

When she had finished, she once again curled up in the shadow of the callistemon. You can watch a video of her drinking here, you’ll see the shadows of the wrens flying around, they weren’t happy.

Summer is snake season here in Tasmania and although there have been some years I haven’t seen any, I know they are always there. This season, we have seen a lot, probably making the most of the warmth after a prolonged winter. Recently, I saw the familiar black tail disappearing under the Golden Diosma as I approached. Curious to know the whereabouts of the refuge, I (very warily) followed the curve of the bush and saw the same tail retreat down a hole in front of the rainwater tank. We knew of the existence of the hole, a home to previous residents, but we had filled it in. I returned half an hour later to find, to my surprise, a very cosy couple sunning themselves.

The larger of the two, presumably the male, withdrew to safety when he sensed my presence. The second one was obviously far too comfortable.

I tried to find information regarding breeding pairs of Tiger snakes but have had no luck. There is no mention of snakes staying together once mating has taken place. I wanted to learn more and was concerned about the dull appearance of the smaller snake. Emails and phone calls to Parks & Wildlife weren’t particularly helpful, they suggested I contact Reptile Rescue Inc. for information. Finally getting through on the third call to them, I was promised a return call to enlighten me re breeding pairs. The call never came. I eventually received an email from Parks & Wildlife that explained a snake can look dull just before shedding its skin. Two days later, Michael presented me with this.

Found in the garden under one of our tree ferns, we don’t know what happened to the back half. I wish I had been witness to the transformation. Even the eye holes are perfectly formed.

We saw her again a couple of days later as she joined her mate by the pond.

Two days of heavy rain followed and we haven’t seen them since. Apparently, it is usual for snakes to move on once they have shed their skin, I wonder if they are still together?