Last month, the tenth biennial Ten Days on the Island festival inhabited Tasmania once again. Previously, the program has run throughout the state over the course of ten days. This year, it was split over three weekends, firstly in the northwest, then the northeast and concluding in the south. We  couldn’t resist the opportunity to experience the opening of the festival on the beach at Devonport at sunrise. mapali was a celebration at first light, narrated by David manganeer Gough featuring over a hundred performers from the indigenous community, Slipstream Circus acrobats, Taiko Drummers, school students and a community choir. We didn’t anticipate the crowd and lack of parking, the fires were alight by the time we reached the beach.

David’s voice was clear as he led a Welcome to Country ceremony, acknowledging the significant history of the northwest coastline and local aboriginal communities with the sweeping and smoking of the beach.

The kelp gatherers made their way eerily from the shore in the firelight.

With the rhythmic beat of Taiko drums resounding in the still morning air,

our attention turned to a solitary dark figure suspended in a hoop above the sand.

The drumming ceased while a chorus of ethereal voices harmonised from the balcony.

Our senses feasted as a fusion of drums and chorus accompanied the visual spectacle evolving against the peppery hue of nature’s backdrop. 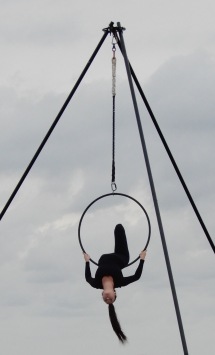 We were next summoned to the village, a representation of a traditional village of the punnilerpanner people who have lived in this area since the beginning of time.

On this, International Women’s Day, David spoke in honour of the women who hunted off the coast for shellfish

and gathered kelp to clad the huts.

He also paid respect to ongoing traditions that the women are passing on to the young, in particular, shell stringing. For thousands of years, Aboriginal women have been collecting maireener shells to make necklaces and bracelets. The shells can only be collected at certain times of the year and each necklace has a unique combination and pattern. Local schoolchildren had made huge effigies of the shells in readiness for this moment.

David instructed those positioned around the edge of the village to hold up the rope, a symbol of the twine that binds us together as people, and string on the maireener shells to represent a giant necklace.

He then commanded the lighting of patrula, meaning fire in palawa kani, the language of Tasmanian Aborigines.

With the sunrise ceremony concluded,

the crowd dispersed, the beach resumed its peaceful sublimity

and we went in search of breakfast.