One of the things we noticed on our earlier visits to Tasmania was the presence of the bumblebee, something we had only seen in Britain. I was distracted from my gardening recently by the frenzied activity around the Grevillea.

I sat with my camera, trying to capture these gorgeous little creatures at work. Bombus terrestris have round, furry bodies with a yellow band across the thorax and abdomen and a buff coloured tail end. 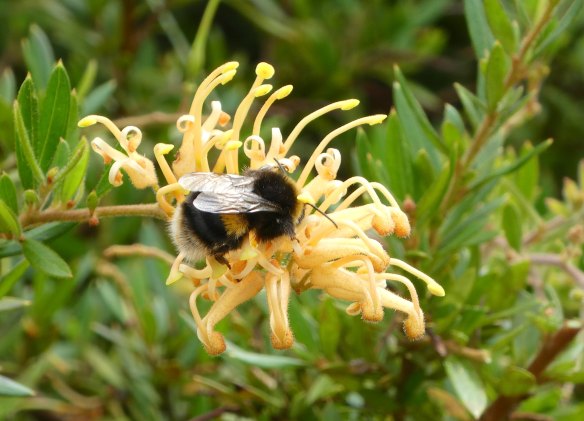 They were first found in Tasmania in 1992, presumably introduced from New Zealand. Like their honey bee relatives, the bumbles feed on nectar. They lap up the liquid with their long, hairy tongues, sometimes making a hole in the base of the flower to access the nectar. 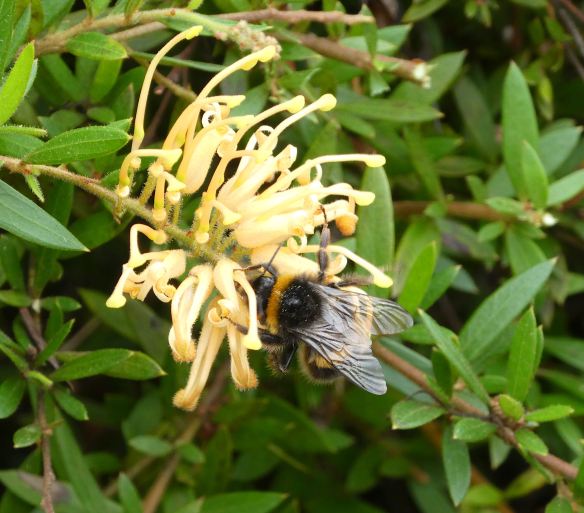 Our cooler climate doesn’t bother these bees, they can absorb heat from even weak sunshine and are well insulated under their thick coats.

Bumblebees are very social insects and, apparently, very smart. There have been many studies on the behaviour of bumbles, I like the idea that they can play football

Unfortunately, in Australia the bumblebees are considered feral, with some concern that, being such efficient pollinators, they will increase the spread of environmental weeds. However, their decline in Europe, North America and Asia is causing concern as they are important agricultural pollinators. Tomato growers in Tasmanian have fought for years to change the laws to allow them to use bumblebees as pollinators but their applications have been rejected on environmental grounds.

6 thoughts on “the humble bumble”