Leaving the beautiful county of Yorkshire, we made our way south to the equally stunning county of Cheshire. We couldn’t resist a visit to Lyme Park estate. The largest house in the county, surrounded by 6 hectares of formal gardens, is set in a deer park of 550 hectares in the Peak District National Park. The entrance gate was impressive, I love the mysterious padlocked door.

The house dates from the late 16th century and has been gradually developed since then, with modifications made by Italian architect, Giacomo Leoni, in the 1720s. The sweeping circular drive approaches the north front of the house. 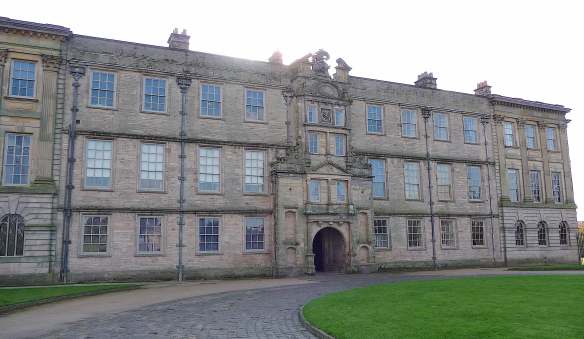 The west front dates from the 18th century

as does the magnificent south front.

You may recognise this as Pemberley from the TV production of Pride & Prejudice. Who can forget the scene where, after taking a bath (fully clothed) in the lake, Colin Firth as Mr. Darcy encounters Miss Bennet, attired in his soaking wet, white shirt?

Sorry, where was I? Oh yes, the gardens. The formal gardens were created in the late 19th century,

the intricate Dutch garden was initially laid out as an Italian garden and is usually bursting with colour. Unfortunately, the summer bedding plants had finished in late autumn. The four cherub statues represent the elements of Earth, Fire, Air and Water.

The Timber Yard is a cluster of buildings where we found a cosy café and quaint shops. Created in 1904, the café was once the joiner’s workshop and the ice cream parlour was the boiler house. During the war years, it was used as living quarters for the RAF. Some of the buildings are now residential cottages.

I can think of worse places to live.