We rarely see echidnas in the wild and were very excited when, travelling back from lunch at a friend’s house, we spotted one foraging in the grass.

Echidnas are fascinating creatures. Along with the platypus, they belong to the order of monotremes, the only living mammals that lay eggs. Evolving between 20 and 50 million years ago, their ancestors were aquatic before echidnas adapted to life on land.

The cream coloured spines, around 50mm in length, are actually modified hairs. The fur between the spines provides insulation and ranges in colour from honey to dark reddish-brown and even black.

Long-beaked echidnas are only found in New Guinea, we have the short-beaked variety here in Australia. The Tasmanian ones are larger than those on the mainland and their fur is thicker and longer, concealing most of the spines. 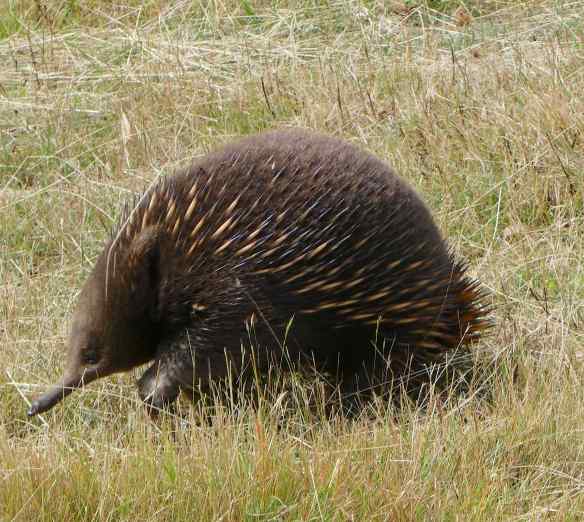 Their diet is mainly ants and termites but the echidna is also partial to grubs, larvae and worms.

Breeding season is between June and September. A single egg is laid into the backward facing pouch where it hatches after 10 days. Echidnas don’t have nipples, they secrete milk through two patches on the skin from which the young suckle. Around 3 months of age, the puggle (such a cute name for the baby echidna) leaves the pouch or rather, mother ejects it due to the growth of the spines. Mum leaves the puggle while she goes off to forage and returns every 5 days to suckle it, until it is weaned at 6 months of age. She then leaves it to fend for itself, never to return.

Echidnas do have natural predators, despite their spines, such as eagles and Tasmanian Devils. They were a favourite food of the early settlers and Aboriginal people. Fortunately, even though they are not considered endangered, they are now protected by law. After posing for a few photos, we left him (or her) to enjoy afternoon tea.