We had a lot of ground to cover after leaving Newcastle, and so spent only a brief time in Belfast. The inclement weather didn’t encourage us to explore too far but what we did see was extraordinary. Founded in 1868, this fabulous wedge-shaped building was originally called the Shakespeare, the clientele mostly from the theatre. We should have ventured inside Bittles Bar but it was a bit early for a pint, even for us. The traditional Victorian Bar is apparently adorned with interesting artwork and portraits of Ireland’s literary and sporting heroes. 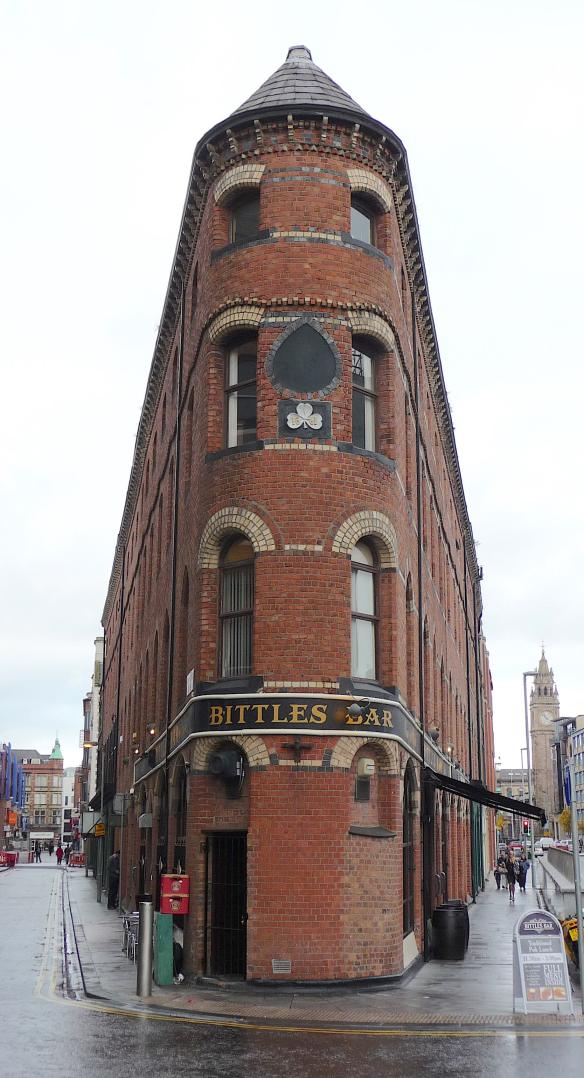 Adjacent to Bittles Bar was a rather ornate bright yellow drinking fountain. The Jaffe Memorial fountain was erected in 1874 by Otto Jaffe, Belfast’s first and only Jewish Lord Mayor, to commemorate his father. Daniel Joseph Jaffe was a merchant from Hamburg who came to Belfast in 1850 and set up a linen export business. He was quite the philanthropist, funding the building of Belfast’s first synagogue and Otto followed in his footsteps, giving much to the community. This is without doubt the most spectacular drinking fountain I have ever seen.

I did not expect to see a giant Ferris wheel in the centre of the city. Belfast’s answer to the London Eye, the Belfast Wheel opened in 2007. There was much controversy over the location of the wheel, it had been built around and on top of the Titanic Memorial on the grounds of Belfast City Hall. Following objections from the Belfast Titanic Society and the Environmental Agency, the Belfast Wheel closed for business in April 2010.

The criticism was based on the location, not the wheel itself, it had proved to be a great tourist attraction. It did seem out of place next to the majestic City Hall for which planning began in 1888 after Belfast was awarded city status by Queen Victoria and construction was completed in 1906. Built mainly from Portland stone, it covers an area of one and a half acres. The four copper-coated corner towers and central dome are the distinctive green seen on other Victorian buildings.

There was so much more to see in Belfast, we may have to return one day.