I was never really keen on Guinness before our trip to Ireland but I certainly developed a taste for the dark brew while I was there. To consolidate my learning experience, our first port of call in Dublin was the Guinness Storehouse. There was no shortage of signage to help us find the door.

Converted to the Guinness Storehouse in 1997, there are now seven floors to explore surrounding a glass atrium in the shape of a pint glass. It is the largest beer glass in the world and would take 14.3 million pints to fill.

Starting the self-guided tour on the ground floor, we were introduced to the four ingredients in beer; water, barley, hops and yeast. Contrary to popular belief, Guinness is not made from Liffey water even though the brewery is right there on the banks of the river. The crystal clear water is pumped from the Wicklow mountains to the south. 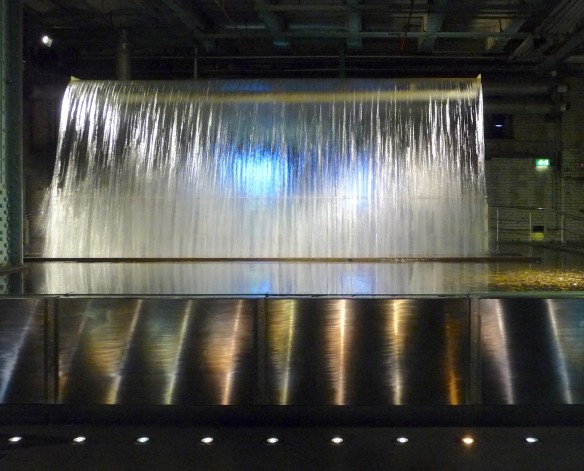 Roasted malted barley gives Guinness its dark colour and unique flavours, along with a generous helping of hops.

The extra ingredient in Guinness, the fifth, is the most important. In 1752, Arthur Guinness inherited £100 from his godfather and set up his own ale brewery in County Kildare. Seven years later, he moved to Dublin to try his luck, signed a 9,000 year lease on a property at St. James’s Gate and the rest is, as they say, history.

As our tour continued through the other floors, we passed copper fermenting tanks

and an old copper lid that was installed in the Guinness Park Royal Brewery when it opened in 1936.

Kegs travelled past on a conveyor belt 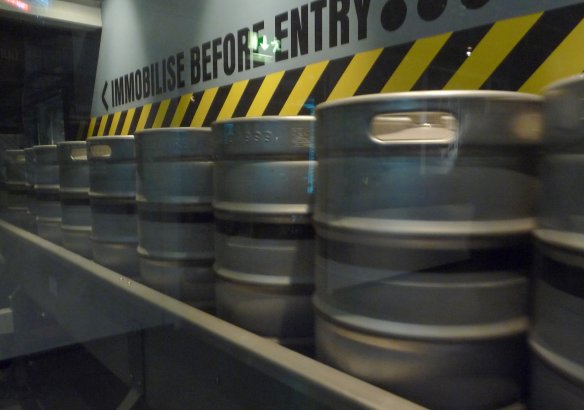 and barrels were stacked, full of the famous brew.

A whole floor was dedicated to the world of advertising. 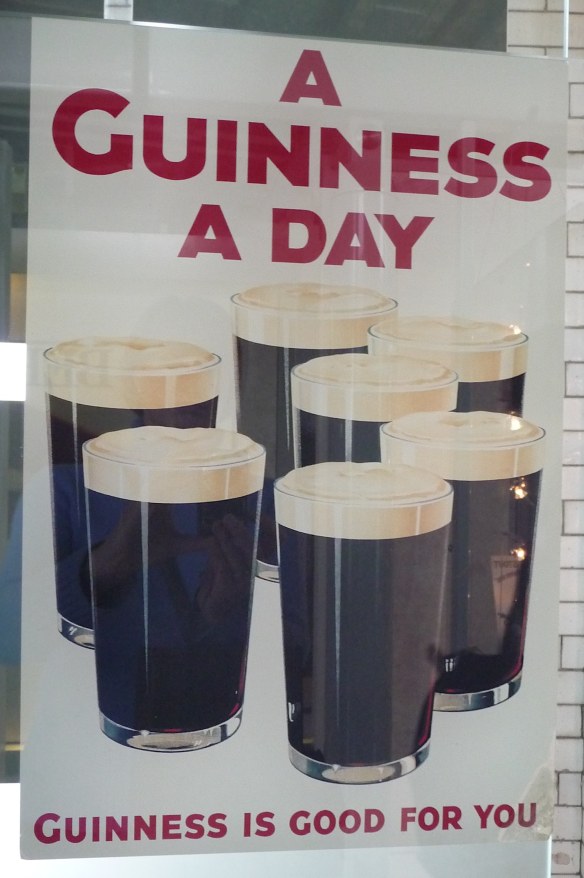 The Guinness harp was adopted in 1862 and is modelled on the 15th century Gaelic harp displayed at Trinity College in Dublin. It faces right instead of left to differentiate from the Irish coat of arms.

We reached Nirvana on the seventh floor, the Gravity Bar, with fabulous views of Dublin and a free pint of nectar. We had heard that Guinness tastes better in Ireland, particularly in Dublin. Why is this so? One theory is that it is always fresh, the tap flows all day and it hasn’t sat in the pipes for long. Another is that the locals know how to serve it at the right temperature, in the right glass and with the right head. They have perfected the two-stage ‘double pour’ which should take exactly 119.5 seconds. So, what is the secret behind that creamy head? In 1959, Guinness began using nitrogen instead of CO2 which produced smaller bubbles and therefore, a smoother consistency. Whatever they have done, they have done it right. Cheers!

4 thoughts on “Guinness is good for you”